I am a lady…do YOU understand ME?

Let’s talk about something real…or is it real? I confess – I bought and read Steve Harvey’s book “Act Like A Lady, Think Like A Man” when it first came out and read it cover to cover…twice. When it was published, I had just got out of a long-term relationship. Okay, it wasn’t a very good one and I don’t really want to use the word ‘relationship’ to describe it because I don’t think it was a grown-up RELATIONSHIP, as in between a man and a woman…but I digress. Tonight I watched the movie, based on the book, called “Think Like A Man”. It was funny. It was cute. It was real. But to me, it was also missing something… 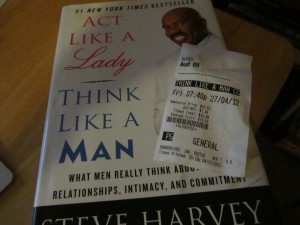 Man. Woman. The ying and the yang? Venus and Mars? Opposite sexes? Penis and vagina? Depending on where  you’re at in life you might use one of those to describe the relation/link (or difference) between the two, but the truth remains – we are unique.

Now I do agree with Mr Harvey – men are hunters and women the hunted. I also agree with Mr Harvey that men do chase the p**sy and yes it does run the world. The way he broke it down about standards, and ensuring that women lay them down from the beginning, is true…but REAL women KNEW that already. The truth is every REAL man and every REAL woman have standards and they stand in their own integrity to maintain them no matter what the situation is, nor whom it involves. I think that the book and the movie are good guides to say someone who is in their 20s and has really just started ‘dating’, to understand what it means. However, the thing that I didn’t really care too much for is the fact that it has been broken down, and presented as a game.

Personally, I hate playing games and it’s not that I don’t think that people play them but REAL men and REAL women, don’t have time for that s*it. They’re either in or they’re out. And guess what THAT is based on? It’s not about waiting 90 days to sleep with someone, or about forcing him to grow up, or about making an ultimatum to put you first, nor is it about getting him to put a ring on your finger. The truth is, well what I believe is that it’s about connections, deep connections actually, and the right timing. And THAT is something that NO ONE can give you guidance or clear-cut rules about. In fact, when something like that happens, your life becomes a love song, and a romantic movie, and a romance novel because it is something which changes your whole perception of what the world is truly about. You feel like a teenager again – you know that time in your life where you had dreams and aspirations and you felt able to achieve them all? Yes, THAT connection aka true, unconditional love. And you know what happens when a MAN and a WOMAN connect deeply at the right time and find unconditional love with each other? They commit to one another on every level and they work as a team to live the life that they decide on. They respect each other and they nurture each other’s love. They live. Not happily ever after, because one, nothing is promised and two, life isn’t always great. But they live through the good and the bad, and the happy and the sad and they work hard to grow together and give the needed amount of time and energy to their RELATIONSHIP.

And you know what else is real? When you meet ‘the one’…you will just know. The belief of that truth and that feeling will radiate through your entire being and you will know that you have never been more sure of anything in your entire life.

But that only happens when YOU and your love are both READY.

If you’re just dating, it is useful to read “Think Like A Lady, Act Like A Man” and the movie “Think Like A Man” is a good one to watch. But before you apply any of those ‘rules’, get to know yourself and understand where you are in life. ‘Cuz if you really are in tune with you, you’ll be honest enough to admit to yourself what YOU need to work on in order to PREPARE yourself to have someone by your side.